If you are reading this article, there is a good chance you are reading this at home, where you now currently work five days a week. More than six months after the global Coronavirus pandemic began, most work environments are far from normalized (if that word still means anything). Such a scenario would have been unimaginable just months ago and yet in a relatively short time, businesses have learned how to conduct meetings, streamline approval processes, learn new collaboration tools and deliver presentations (from internal meetings to full-blown sales conferences). In short, the crisis has forced companies to digitally transform whether they were ready to or not!

But is the effect of the Coronavirus a disruption, changing the course of business as we know it? Or simply an acceleration of a path towards digitization most industries were already headed down anyway (albeit at a snail’s pace)?

“Things won’t change as much as they will accelerate,” said Scott Galloway, Professor of Marketing at the New York University and host of The Prof G Showpodcast. “While other crises reshaped the future, COVID-19 is just making the future happen faster.” 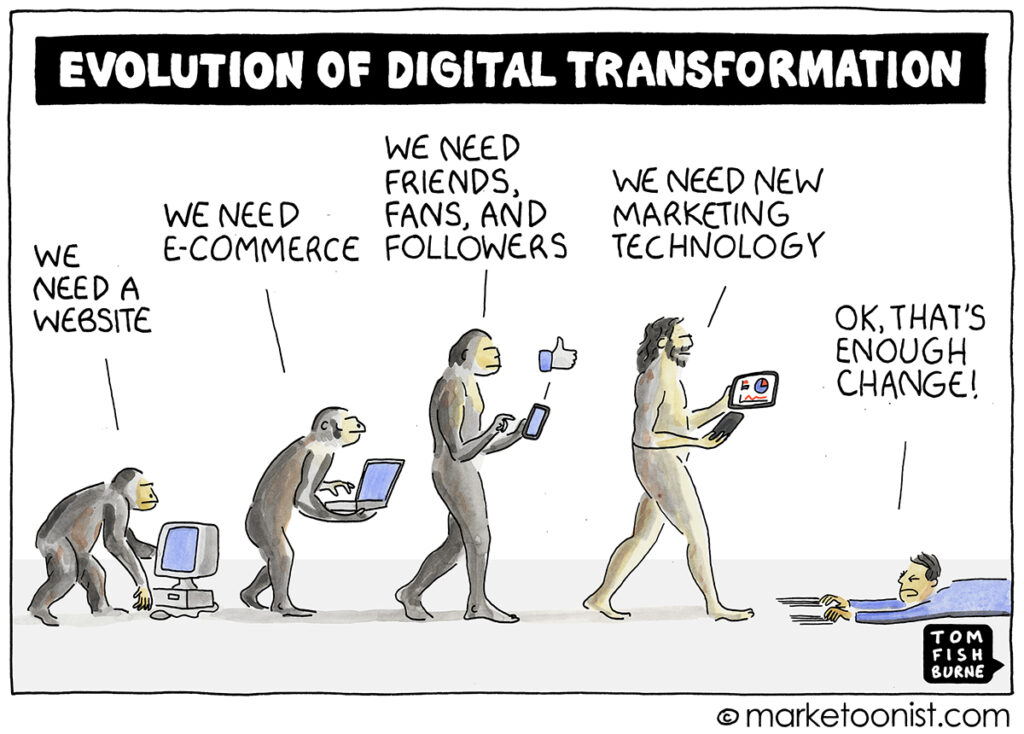 A recent survey conducted by McKinsey found that across the board in all product categories, consumers in the US and UK showed that digital payment and ecommerce advanced at the pace of years in just a few months. “Coronavirus has really pushed us 10 years ahead in terms of digital channel adoption,” reports Albion Murati, partner at McKinsey.

The Coronavirus Pandemic has made the need to advance Digital Transformation, regardless of company size or even industry, more urgent. However, transformation is not a simple matter of a technological or business process upgrade. Evolving into a company that is future-proofed against crisis and external disruption also requires a cultural change if the transformational effects are to endure.

Inevitably, the role models for digital transformation are digital native companies: brands that were born and have become household names in the digital era of only the last 20 or so years. The phrase conjures up images of open-seating offices featuring neo-industrial design, bicycles leaning against the wall, game rooms, “huddle” spaces and in-house baristas and the logos of Facebook, Uber or Spotify on the walls. Admit it. When you hear the words “digital company culture,” that’s where our brains go. We think of the trappings, the visible, the tangible things.

The truth is authentic digital culture is not achieved by hiring an interior decorator. The benefits are far less tangible:

Customer Centricity – True digital companies tend to understand customers better than they understand themselves. Amazon CEO Jeff Bezos talks about customer focus as an “obsession.” It’s what has allowed them to develop breakthrough features and grow the company on an unrivaled scale. No customer asked Amazon for Amazon Prime. No one asked Amazon for the voice-enabled Echo or Alexa. And yet look at how well those products have been embraced by customers.

Top Talent – Digital companies attract the industry’s most intelligent, creative people. There is a reason why when you ask young people who they would like to work for, Google is always somewhere at the top of that list.

Innovation – Digital companies are developing the products and services that reshape the modern world. Remember when Netflix was just a company that rented out DVDs by mail? Today they are one of the biggest entertainment brands in the world. They went to market with video streaming service long before incumbent industry players HBO, Viacom or even Disney knew what was going on.

To be true Digital company, an organization must rely on data for its everyday decision-making.

Digital companies also have companies whose workforce operate with flexibility and agility. (And when I say “agile” I don’t necessarily mean with a capital “A.” I just mean work processes that are nimble and are not slowed down by complexity.)

And finally, a Digital culture is one that rewards innovation: a place where employees are unafraid to experiment and take risks.

I once worked for a company where, in a meeting with the Head of Product Development, she began with the phrase, “My grandson told me…” when explaining the reason behind a major feature change. Yes, a major business decision was being justified by something a child told her.

Don’t get me wrong. I am not saying intuition and experience have no place in business strategy. (They do.) But modern companies should base their decisions (or at least validate them) based on empirical data. You might argue that’s obvious and, surely, in 2020 companies don’t make decisions without data anymore.

Just last year, according to the Data-Driven Mindset Report, 17% of marketers and PR professionals said they have a high degree of “data literacy” or the “ability to read, understand, create and communicate data as information.” However, the same research also showed that less than 15% of businesses say their organization’s culture supports data-driven decision-making. There is a clear disconnect.

One of my favorite examples of how using data has transformed an industry was chronicled in the 2012 feature film Moneyball (based on the book Moneyball: The Art of Winning an Unfair Game by Michael Lewis). The premise of the film is that the collective wisdom of professional baseball insiders (including players, managers, coaches, scouts, etc) over the past century is outdated, subjective and fundamentally flawed. Teams were entirely dependent on the skills of scouts to find and evaluate players. General Manager of the Oakland Athletics Billy Beane (played by Brad Pitt) enlisted the help of whiz kid Peter Brand (played by Jonah Hill) who instead used statistical analysis of player data. (Watch the scene were this methodology is explained here.) By reevaluating their recruitment strategy in this way, the 2002 Oakland A’s, with a budget of only $44 million, formed a winning team of 3rd and 4th string players. They went on to outperform other teams with over $125 million in payroll that season, sending the A’s to the playoffs in 2002, and clocking 20 consecutive wins, a feat unachieved in Major League Baseball since 1935.

Most large companies – speaking from experience, Asian companies in particular – tend to operate under strong hierarchical structures. While it is common to hear an organization embrace teamwork as a core value, departments most often work in silos, rarely communicating with one another. They often end up duplicating work and operate with a low level of transparency.

Another hallmark of such organizations is where every internal meeting has 12 or more people in attendance. These meetings have only two or three people, typically the most senior, dominate the conversation, while the others sit quietly, pretending to pay attention while hiding behind their laptops. Consequently, decisions are made by the persons who are the most senior, or even simply the person with the longest tenure, rather than the one who has the expertise.

While complete organizational restructures are complex, expensive and take up a lot of time, one way around deep-rooted hierarchy-based cultures is to appoint cross-functional teams to address specific tasks or projects (also commonly referred to as “taskforces.”)

“Small, multi-disciplinary teams can drive big change within companies,” said consultant and author Neil Perkin of Only Dead Fish in an interview.

In a cross-functional team, members from various departments with different skill sets come together to work on a project or reach for a common goal. Shared decision-making, regular team building and working towards a common goal improves communication skills throughout every layer of the organization.

Cross-functional teams also enable the company to try out different team members in leadership roles, see how they perform and whether they thrive in such roles. In cross-functional collaboration, the most senior executive is not necessarily the one leading the group. In addition, a different leader can bring new energy into a project while making them feel appreciated and respected.

Finally, being assigned to a small taskforce can reinvigorate an employee’s connection to the employer. Cross-functional teams disrupt the status quo and allow innovative ideas to flow in a mixed group of people who might otherwise never work together. Employees consequently feel re-energized and think more creatively when put in a new environment with different people.

Google’s way of working is best known for its Entrepreneurial Innovation philosophy. That means employees are encouraged to have the mindset of an entrepreneur, even treating their internal departments as if they were standalone startups. This way, they are unhindered by legacy processes or bureaucracy. They are given the flexibility to set their own goals and timetables.

Google also famously allows their employees to spend up to 20-percent of their time on non-critical “side projects,” or initiatives that have nothing to do with their day jobs. Google even offers innovators to take a stake in the ideas that are spun off into full products or companies, so the individuals see a direct result of their efforts in their paychecks or stock awards. Household names like Gmail, Google Maps, Twitter, Slack, and Groupon all started as “side projects” in their respective companies.

Critically, make sure that innovation is part of your team’s performance evaluation. While “innovation” is commonly preached in companies today, many continue to hold staff to KPIs that reinforce the status quo.

For example, in one company I worked for, one of the goals set for the marketing team and media agency was how much (as in a dollar value) they could extract from publishers in terms of rebates or volume discounts. The problem was there are no volume discounts for Google, Facebook etc because purchasing digital media is based on a bidding system. In effect, the company was incentivizing the marketing team not to spend their budget in digital.

By building innovation goals, essentially linking them to performance evaluations and bonuses, your teams have no choice but to break some rules and change the status quo.

Finally, some companies have taken the idea of innovation through standalone teams one step further by fostering intra-preneurship. Employees are asked to work on a new product or service, with a distinct public-facing brand, from within the company. That means even though everyone working on the project remains a full employee, they operate as if they were a startup. This can go as far as creating their own logo, their own website or even have a separate office, with its own distinct décor and culture.

So if you’re tasked with driving the promotion of a Digital Culture mindset at your company, hold off on investing in that Playstation 4 or Espresso machine. Instead, make sure you put in place programs that drive these three transformational success factors.

Inspirational talks are a great way to attract prospective customers. Talk to me about how I can help your sales & marketing team.